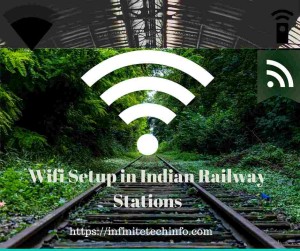 Google is going to provide high-speed public Wi-Fi in about 400 Indian railway stations that will carry millions of passenger’s every day, giving the company an important Headway in India. Last Year Delhi Metro has also announced that they will also provide the free Wifi in Delhi Metro but till now no results are noticed.

The Internet Company is working with the Indian Railways and Rail Tel, a government-owned a provider of telecommunication infrastructure to the railway stations, to initially cover 100 of the Crowdy stations in India before the end of 2016. The first few stations are expected to come online in the coming months of this year.

“Even with the first 100 railway stations online, this project is going to make Wi-Fi available for the about 10 million people who pass through railway station every day,” wrote by CEO of Google Sundar Pichai. The service will be offered free of cost initially, but the aim is to make the project self-sustainable, so as to provide Wi-Fi to more and more stations and other places, he added for this.

Indian railways has the capacity to carry about 21 million people daily and it makes a  plan to create capacity for maximum 30 million passengers in the next five years, with track length also going up by 20% to about 1,38,000 km.

Also, Recently IRCTC in partnership with BookMyTrain.com has launched a new payment mode, Cash on Delivery (COD) for booking the train tickets.

India currently has about 300 million people already online every day.

In commercial terms of the deal between Google & Indian Railways, which  include whether the company will be allowed to serve advertisements to users at the railway stations, were not be disclosed. Google did not respond immediately to a request for comment.

Pichai expects Indian railway passengers to use the Wi-Fi for Streaming an HD video while they are waiting, search for their destinations, or download some videos or a book or a new game for their journey ahead.”

India’s PM Narendra Modi visited Google’s headquarters on this Sunday as part of his effort to drum up support from the Silicon Valley Companies for his project Digital India, which aims to connect more and more Indians through the Internet.

“We want all our citizens to be digitally connected. We already have broadband usage across India which is going up by 63% from the last year. We need to accelerate this usage further,” Modi at a dinner in San Jose on Saturday told Silicon Valley executives.

The country has launched an aggressive expansion of the national optical fibre network that will take broadband upto about 600,000 people, he told the executives, acc. to India’s Press Information Bureau.

India does not censor the Internet systematically as does neighbouring countries like China, but it has conflicts with Internet companies & local users over access to data by law enforcement, and the removal of pornographic content and material considered religiously offensive in the past.

Ahead of Modi visit to the United States., the country’s ministry of information & technology released draft rules for encryption that would require users to store the plain texts of the encrypted data for 90 days from the date of a transaction and provide the text to the law enforcement agencies when required under the laws of country. The draft rules were withdraws after the protest by the people of India and the government to clarify that it did not represent to its policy.

On this Sunday, Modi also visited Facebook’s headquarters, had a Town Hall QandA for which the company said that it had already received more than 40,000 questions from the Facebook community.

Both Facebook & Google have launched development programs in India. Both companies, however, also have few problems in India.

Facebooks Internet.Org application and mobile were renamed free basics with the FB last week that has been criticized for creating the “walled Garden” of free Internet services on its own for low-income users. The company has said it had opened up the project to any interested developer under certain conditions. Google is meanwhile being investigated by the Competition, the Commission of India for the anti-competitive practices in its advertising programs.