The Big question Which One is Better: Yu YuFit or Xiaomi Mi Band 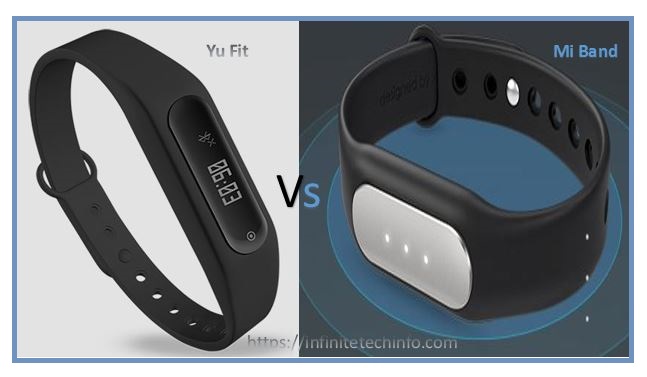 Here is the Comparison Between YuFit and Xiaomi Mi Band

Wearable technology is in and it is now reachable to the masses but still it is away from the common man. There is no doubt it is making mark. Xiaomi Mi Band has also come in competition in low price so it will be more grabbing for the people. Xiaomi Mi band is costing around only Rs. 999.

Xiaomi is snatching other company consumers due to its reach to the common man. Other companies are offering the same band in more $100 price.

When Xiaomi came we had in mind that which brand will come with fitness band well that is YuFit by Yu and also by Micromax. Most interesting thing is that both priced at Rs 999. If you check out YuFit and Mi band difference of the same rated devices then you will able to analyze, which is perfect for you.

If Mi has got tag for having reasonable fitness band then Yu is also affordable but with display which is missing from Mi band. But both of them have regulated the market with its presence.

In various ways Xiaomi has done lot of things in which Yu are still behind. Yu has its local origins and with help from its parent company while Micromax is in its own way good.

YuFit band is a rejig of small things

Xiaomi has its hardware and software on the side of Mi Band while YuFit provides its feature that has been available with another device. Healthifyme as you might know has been in the limelight for the Micromax that has put in its money, to finance Yu’s wearable goal. There is start-up’s app which will run with YuFit once it is made available in the next month. So, all the way Yu has to be definite that YuFit and the app become integrated to the extent of Mi Band and MiFit app. It will be great to watch which direction Yu goes with YuFit from app accordingly.

If Yu want to gain more sell more than Mi Band, it has to apply the supply-to-demand strategy. Xiaomi has sold few Mi Band products, whereas Yu will take time of one month more. Xiaomi should make a move with more selling so that Yufit existence will not affect the selling of Mi Band. YuFit has yet to come in the market and what will the place it will secure in the market only time will head it.

So, which will be your ultimate choice, will you go for Mi Band or will you wait for YuFit? What is your say?

Fitbit also release all it trackers in India, check out fitbit coupon.