HOW TO INSTALL WHATSAPP ON NOKIA ANDROID DEVICES

You Might have Searched Whatsapp so many times in Nokia App Store but  all in Vain, it has showed you that your device hardware is not compatible with whatsapp, and instead of whatsapp you will find whatsapp lock, whatsapp wallpapers etc.  Now read the steps and then you can easily install the whatsapp in Nokia Android Devices. 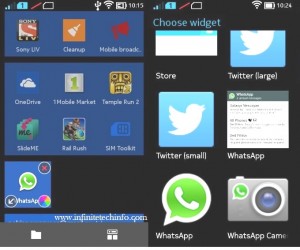 >>  Uninstall the Previous Version of Whatsapp From your phone and all the Files of that Version.

>> Clear app data ( go to settings > apps  > whatsapp > clear Data). By this your all data of old version of whatsapp will be deleted.

>> Now install the New Version of Whatsapp  that is Whatsapp Plus from Sofware Websites or You Can also install the Whatsapp Plus by Searching on Google to get link of a Website and You can install from there easily. Now that’s it, Enjoy with Your Whatsapp Plus Stay Connected With your Near ones.